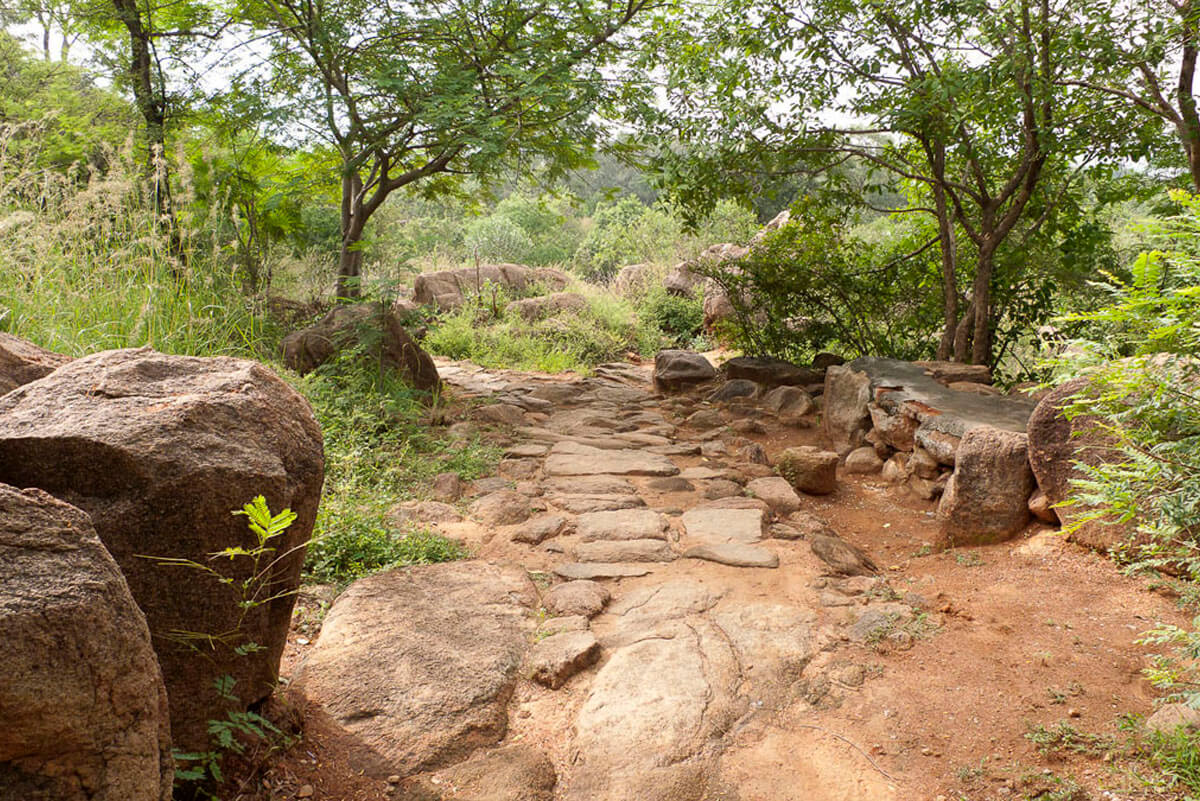 I get up early after a noisy night of surreal dreams, eat an iddly breakfast and take a rickshaw to the Sri Ramana Maharishi ashram. It’s a beautiful morning to climb Arunachala. The mountain path leads the way on a steady incline. My senses awaken to the song of birds, sweet fragrances of flowers, gentle wandering breezes and under early morning sunlight the entire hill takes on a pink glow. My lungs fill with fresh air and I feel a true connection with nature that gives me a great sense of joy. I walk mindfully on the path aware of the rise and fall of each footstep, in silence my bare feet feel the warm stone. I am totally conscious, immersed in the moment. I think how incredible it is that Sri Ramana Maharishi walked this very path decades ago. My footsteps blend into his and the path is wrapped in an aura of silence. 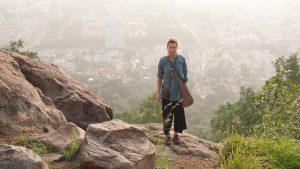 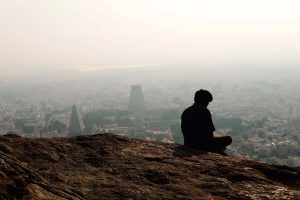 Towards the top, large rock slabs provide a perfect resting place with a spectacular vista of Tiruvannamalai. I sit down on a scorched boulder and contemplate the scene. From this height, the huge Arunachaleswar temple is the size of a toy structure, set amid straight streets and bazaars in the centre of this little township. The nine stately gate-towers rise in sculptural magnificence out of the square compound behind high enclosing walls. Year after year, Sri Ramana must have sat here and gazed at the same panorama, watching humanity from this lofty height and the life he had left behind. The world seems more remote and I feel a sense of detachment that allows me to feel like a witness, an observer, being both in and out of the world at the same time.

A little higher up, Sri Ramana’s hermitage, Skandashram, comes into view. It’s an enchanting spot, sheltered by a coconut grove and set against the steep cliffs of Arunachala. Two small rooms were built into a natural cave below giant boulders. The Maharishi lived here with his mother, Alagammal, until her death on May 19, 1922. It was at the end of that year that he permanently made his home at the bottom of the Hill in what is now Ramanashram. Alagammal cooked for her son and in his presence also attained liberation. Her room is now a shrine and her Samadhi is down below in the ashram.

The construction of Skandashram was a bit controversial as it involved quarrying of stone from the face of Arunachala and wouldn’t be allowed today. Not appropriate if you consider the mountain to be Siva himself. Under the auspices of the Reserve Forest it has become increasingly difficult even for sadhus to spend time in caves on the hill. In Thiruvanamalai: The Power and Glory of The Mountain Path, A.D.M. Panneerselvam writes:

“Here follows yet another proof to show that the Mountain itself is Lingam. No one can dare to carry on quarrying on the Hill for its (granite) stones. And Aranachula proclaimed it to the world through an incident. Once the devotees of Bhagavan Ramana Maharshi cut a stone slab from the hill and honoured their guru by seating him on it. And Ramana, the saint of the first order, had to suffer from cancer. It was a sport of Lord Siva.” 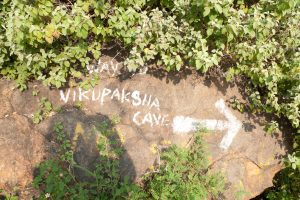 A sadhu gives me a plant to chew and my thirst is quenched. The path descends steeply towards to Virupaksha Cave, past a waterfall with cool, crystal water that splashes out of a crevice in the rocks. The cave is in the shape of the mystic syllable “Om.” It is named after the great 13th C. saint, Virupaksha Deva, who spent most of his life here. He supposedly lived to be 450-years old and when he was finally ready to give up his body, he transformed to sacred ash. His remains are preserved inside the cave. Sri Ramana lived in this cave from 1899 to 1916. On one of the rare occasions that he spoke, and as an explanation as to why he taught through silence, he revealed that the blazing column of light in the shape of Arunachala communicated to him in silence and commanded him to be silent. It directed him to look within; gaze steady into the Self with the inner eye, and there liberation would be found. 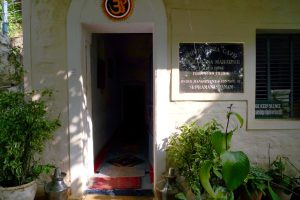 An iron gate leads to a pleasant seating area where visitors can relax outside the cave. A Brahmin attendee performs his many tasks of the day. There is a small outer room with a collection of Sri Ramana’s books and the entrance to the cave. Inside, I see a mound covered with flowers that I later understand to be Virupaksha Deva’s ashes. I can feel heat radiating from the mound. Some places are so imbued with spiritual force that it can be felt as a pressure on the body, and this place is certainly one of them. It is a very powerful. I feel sucked into the warm womb of darkness and find a cushion on an elevated platform. An unbelievable serene sensation comes over me. I feel the energy of the cave supporting me on my spiritual path. I am able to sit in silence, a practice that I try to do each morning for many years, but in London my mind gets very agitated. 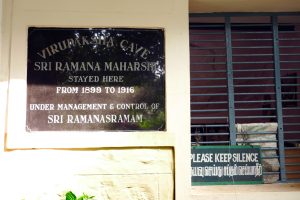 The Maharishi spent countless hours of intense spiritual absorption here, locked within the folds of his own spiritual heart. He sat as immobile as a rock, cross-legged in meditation. It was here that he wrote his first book, ‘Who am I?’ about Self-Inquiry, the non-dualist path to enlightenment and liberation. Its premise is similar to much Hindu and Yogic philosophy in so much as they maintain that all living beings desire to be happy, without misery, and what prevents us from attaining our natural state of bliss is the ego which perpetuates a notion of separateness, and hence, suffering. All enlightened masters have managed to see through this maya (delusion) to merge with the higher Self, Absolute Truth, or God.

To do this, Sri Ramana instructed people to look to the source from which every thought arises and ask the question, ‘Who am I?’ He knew that those did this would come in contact with the ‘spiritual heart,’ which he said lies “two digits to the right from the centre of the chest”, and the mind will subside and return back to its source. He came to the conclusion that the mind projects all thoughts. He said, “If we can set aside all thoughts and see, there will be no such thing as mind remaining separate; therefore, thought itself is the form of the mind. Other than thoughts, there is no such thing as the world. The place where even the slightest trace of the ‘I’ does not exist is Self. Self, itself, is the world; Self, itself, is ‘I’; Self, itself, is God; all is the Supreme Self. The true Bhagavan resides in your Heart as your true Self. This is who, I, truly am.”

I feel overwhelmed to actually be able to sit in Ramana’s cave and to walk the same path up the mountain that he did. Visitors come and go, but these distractions don’t disturb me. Occasionally, the wind carries the distant sounds of the bustling city into the cave to remind me how much humanity loves material existence. We have lost the reverence for spiritual life worshipped among the ancients. It seems our preoccupation with the external world has created all the problems that threaten our social fabric, peace of mind, and even our continued existence.

A man sits in the same position Ramana did when he meditated – in a wide lotus with arms stretched on his knees and his head slightly lifted to one side. Perhaps the spirit of the great sage is inside his body? I feel so good there is no reason to leave. I have found my teacher. A voice tells me to stay in Tiruvannamalai and climb to the cave each day as my sadana, my spiritual practice. I decide to forgo my plans to tour through Tamil Nadu and do as little as possible. Do my yoga practice and climb the mountain. This is my first lesson. Walking back down the glorious mountain path my heart is bursting with joy. The path is coppery gold and the sky opal-coloured as the sun sinks into its nightly home. I wonder what kind of challenges the mountain will present to me. I hear it can be kind or make you walk through the fire.