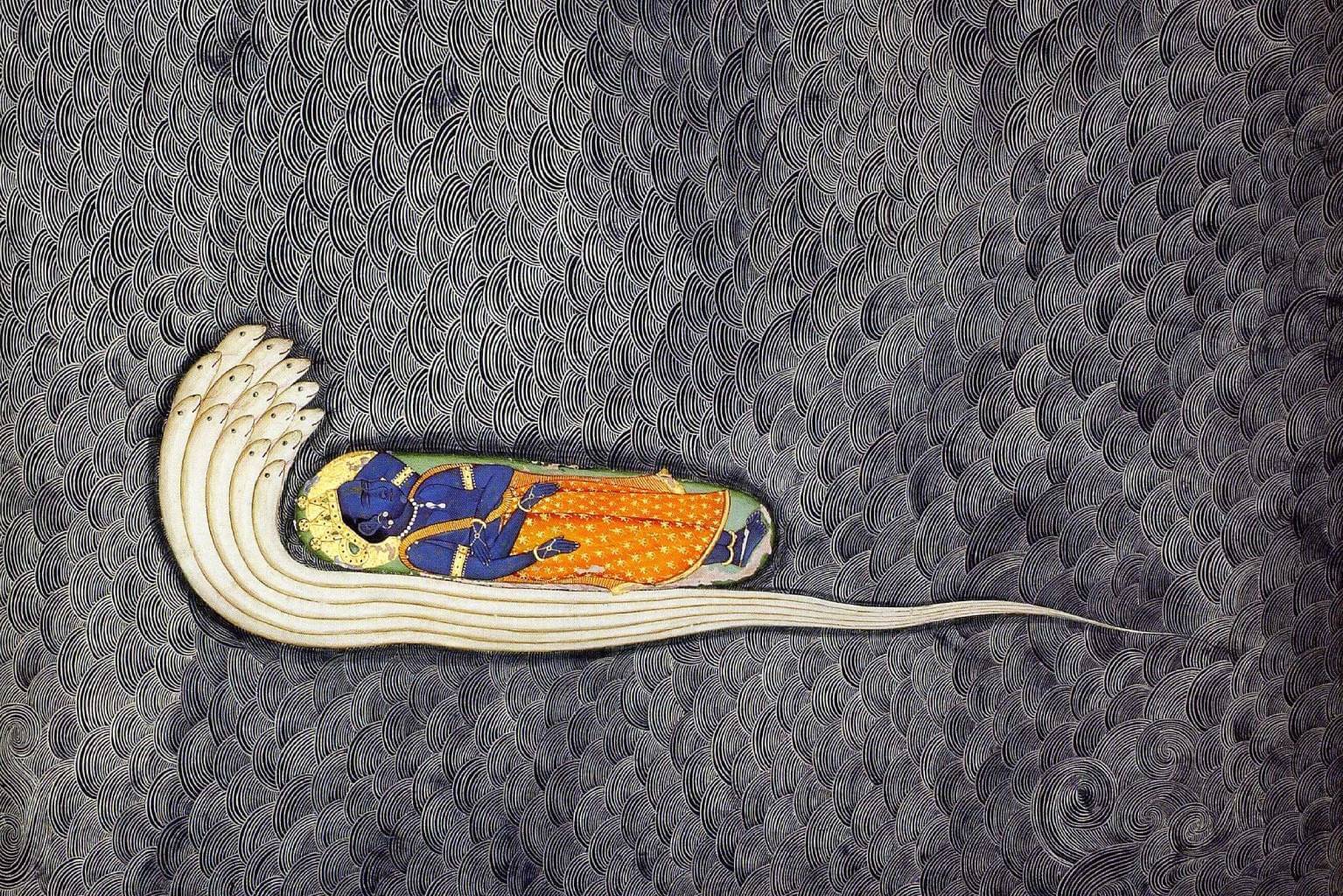 A yoga history in a mustard seed

(Above) Vishnu lies on his cobra between the world that existed and the one yet to come. Cosmos and Gardens, British Library.

Why a Mustard Seed?

A mustard seed is the smallest of seeds and is often a term used in Buddhist philosophy as a metaphor for the essence of the dharma. A specific teaching took place in Varanasi when a young girl, Kisa Gotami, blinded by grief at the loss of her child, asked Shakyamuni Buddha for medicine to bring him back to life. Out of compassion, the Buddha wanted her to understand the truth of life – that death and sorrow are inescapable.

Buddha answered: “Bring me a mustard seed, but it must be taken from a house where no one residing in the house has lost a child, husband, parent, or friend. Bring this seed back to me and your son will come back to life.” The girl, in her joy, promised to procure it and went from house to house. People pitied her and said: “Here is mustard seed; take it!” But when she asked, “Did a son or daughter, a father or mother, die in your family?” she found that in each house a beloved one had died.

Realising the truth of human existence that no one can escape death, Kisa Gotami relinquished her sadness and attachment for her child and buried him in the forest. She returned to the Buddha and became his follower.

The Buddha said: “The life of mortals in this world is troubled, and brief, and combined with pain. Death is certain and can’t be avoided. As ripe fruits are early in danger of falling, so mortals when born are always in danger of death. As all earthen vessels made by the potter end in being broken, so is the life of mortals… therefore the wise do not grieve, knowing the terms of the world.

“Not from weeping, nor from grieving, will anyone obtain peace of mind; on the contrary, the pain will be the greater and the body will suffer. You will make youself sick and pale, yet the dead are not saved by lamentation… He who seeks peace should draw out the arrow of lamentation, and complaint and grief. He who has drawn out the arrow and has become composed will obtain peace of mind; he who has overcome all sorrow will become free from sorrow, and be blessed.”

I use the term ‘mustard seed’ in the spirit of discernment and inquiry to get to the many ‘truths’ found in yoga philosophy and, hopefully, express the essence of those ideas. 🙏🏽

THE HISTORY OF YOGA SPANS A VAST TERRAIN FROM PRE-VEDIC INDUS SARASWATI CIVILISATION TO CONTEMPORARY YOGA. From the Vedas and Upanishads through the Renunciate Movement – or Axial Age – with tapasya yogis and Gautama Buddha. Samkhya philosophy, the Epics, Patanjali’s Yoga Sutras all influence the development of Hatha Yoga. Tantra reigned supreme and merged with Hatha Yoga in medieval yoga texts like Hatha Yoga Pradipika, to produce the evolution of Modern Yoga and Modern Postural Yoga. This article is a summary of the main movements in the history of yoga.

There are many definitions of yoga. No single one embraces the multiplicity of meanings that have emerged over the past 5,000 years. It addressed the big questions: Life, Death, Consciousness and Ethics. Is there a God? Yoga is spiritual, but not religious. It’ an investigation into consciousness and the structure of mind. Our desires and body. Yoga questions how we really know what we think we know. Its goals are immortality, liberation, and power. In a nutshell, it can mean: Freedom. Union. Separation. Concentration. Space. Mind. Mantra. Silence. Magic spells. A spiritual journey.

“When we speak of Yoga, we speak of a multitude of paths and orientations with contrasting theoretical frameworks and occasionally incompatible goals.” – Georg Feuerstein, Yoga Journal (Mar-Apr, 1990) Contemporary India sadhus practice yoga asana in their ashram (above) and advanced Astanga practitioners Tim Feldman and Kino MacGregor (below). Here are some of the most important definitions:

In Pātañjalayogaśāstra 1.2, Patanjali defines yoga as,

Yoga is the stilling of the changing states of the mind.

In other words: Sit down. Shut up! He’s saying to stop doing. It’s about Quietness.

And Geoffrey Samuel in The Origins of Yoga and Tantra (2008) writes,

“Systematic techniques for the training and control of the human mind-body complex[and] the reshaping of human consciousness towards some kind of higher goal.”

Many definitions, but if we were to reduce it to a formula that relates to the practice we do, – concentration or connection – are two techniques that when combined can take you to the state of Yoga – absorption (Samadhi), liberation (Moksha) and, ultimately, transformation.

A TIMELINE OF YOGA HISTORY HAS ITS PROBLEMS. Imposing a linear sense of time doesn’t work in the ancient Indian world which more cyclical. Several truths, or techniques, exist side by side and it can be difficult to discern which is which. The biggest problem is that yoga is an oral tradition, so there is no record. We can talk to yogis and hear what their teacher/guru and teacher’s teacher said, and we can imagine an unbroken lineage that stretches back in time, but there is no material evidence. The most reliable source we can turn to from the past, as documented evidence that yoga existed, is material culture in the form of a text, or a commentary of a text, or a fragment from an archeological dig, artwork, or inscriptions. The thing that is missing is how yoga was taught.

Basically, we’re piecing together fragments of evidence and guessing. We can’t really be sure what’s written in texts accurately describes what people did. Or that it hasn’t missed out the important parts. Often texts were written long after the teachings. The Buddha died in 480 B.C.E., but the first text of his teachings in the Pali cannon didn’t appear until 1 C.E. – 500 years later. It was important back then to have a teacher and not read a book. So, we need to be skeptical and ask what we mean by Yoga Philosophy.

The ‘yogic’ viewpoint is one of the six main philosophical systems, or Darshanas, in ancient India.Darshan = viewpoint. Root is Drish. Drish = to see.  All Indian philosophies are about freedom. Moksha.

A definition of yoga is extremely complex if we want to include Buddhists, Jains and contemporary yogis. ‘Union’ won’t do. That concept exists in Vedanta and Tantra. Some yogis go for ‘separation.’ So, there is a wide interpretation of how to attain moksha (liberation). Several lineages of yoga exist, but the three big ones are Vedic, Ascetic and Shamanic.

To unravel the complex labyrinth of yogic traditions we need to investigate the different ‘yogas.’ Hatha Yoga is what we practice – asana, pranayama, mudras and bandhas – and there is evidence of it in the Hatha Yoga Pradipika. (1450 C.E.), but this is not when it started. The beginning is never a fixed point. As brilliant Western scholars search for the roots of Hatha Yoga, and translate newly discovered ancient texts, new ways of thinking about yoga emerge. For instance, SOAS professor and director of the Hatha Yoga Project, Jim Mallison, recently found an 11th C.E. text, Amritasiddhi, which mentions Hatha Yoga techniques. It’s actually a tantric Vajrayana Buddhist text. So, a new darshan arises as a result of his research. The Indian world is one of multiplicity. Several truths or techniques can exist side by side. An argumentative world. ♦

This series of articles in A History of Yoga is intended for students on my 200-hour Yoga Teacher Training programs and explores the philosophy and practice of yoga throughout it’s history. Many of the ideas  are inspired by the  teachers who have taught Yoga Philosophy on my Yoga Teacher Training programs. Richard Freeman, Emil Wendel, Jim Mallinson, Mark Singleton, Ian Baker, John Weddepohl, Daniela Bevilacqua, Matthew Clark, Daniel Simpson and Ruth Westoby. The Hatha Yoga Project and Centre of Yoga Studies at SOAS, and online courses with Seth Powell (Yogic Studies), have also been influential. As always, deep gratitude to my guru, Dzongsar Jamyang Khentsye Rinpoche, for his presence and teachings.  🙏🏽 Any misrepresentations of facts or dharma are totally of my own doing for which I’m truly sorry.