Back to reality at the foot of the mountain, I find a small room in a guest house surrounded by green rice paddies, and a great view of Arunachula, for £1 a night, hire an Indian push bike, and settle into rural life in Tiruvannamalai. There are very interesting people there, spiritual tourists, many in the 50s, 60s and 70s who have come here for decades. The atmosphere is spiritually charged with people practicing some form of yoga or another. Sadhus in saffon-coloured lungis and matted dreads are everywhere, sitting under giant banyan trees beside sacred tanks, begging along the streets or attending seva where they are fed at ashrams. The Ramanashram attracts a steady flow of devotees, Indian and Western who sit in the great meditation hall, walk clockwise around Sri Ramana’s samadhi, visit the excellent bookshop, and venture out into the nearby chai stalls. (These days the ashram has installed a mobile phone blocker in the Hall and some people are wary of dangerous emissions.) Women make delicious thali lunches in their houses for 50 INR; there are also excellent restaurants with internet access. People smile and it’s all very shanti. Everywhere Arunachala dominates the horizon, its triangular shadow constantly falls across my path, its peak often plumed with a milky-white cloud that stretches towards the heavens. 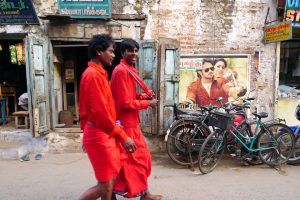 I see a mural of Gandhi that says, “The greatness of a nation and its moral progress can be judged by the way its animals are treated.” The Arunachala Animal Rescue Sanctuary is a clinic set up by an American man in his 70s. In the past few years, he has gathered up the many homeless dogs and spayed them, given them rabie shots, returned the healthy ones to the streets, and provides a home for the sick ones so they receive ongoing medical attention to the end of their days. As a result, there are 2,000 fewer homeless and starving dogs than there would have been without the clinic. He does exceptionally good work. The dogs are not in cages, but are together in compounds, and even though some are in a very poor way they wag their tails and look at me with unconditional love. It is a pure heart connection. Sri Ramana was also a great friend to the dogs.

I offer to do some karma yoga and end up helping five dogs dying of distemper. It’s very difficult work. They are in pain, shaking with a nervous disorder. They are scared and can’t eat by themselves and the terrible stench of urine and death is nauseating. A totally dedicated vet attends to their needs, day and night, and I do my best to alleviate their suffering by helping them to eat, talking to them so they know they are not alone. I play music, put jasmine flowers under their noses, stroke them and send loving kindness through Reiki. What Arunachala has thrown up is a challenge to deepen my sense of Ahimsa, of practicing kindness towards others, and truly cultivating a sense of compassion and love.

On Christmas morning, I cycle around the mountain and visit the temples and charismatic chai shops en route. One small temple has an interesting priest so I sit down hoping for some spiritual encounter. We banter about some Sanskrit yoga terms for about an hour or two, since I don’t speak Tamil and he doesn’t speak English. I show him photos on my iPhone. Then this 60-year old priest, all Siva-ed up with three streaks of white ash on his forehead and a blood red bindi covering his agna chakra, rolls some excellent ganga as Siva worshippers do. Suddenly, he is giving me a massage and I can feel my body tense up. But, he is respectful and it feels more tantric than sexual, as if I am being tuned with the vibrations of Arunachala. Next, he tells me that the blanket we’re sitting on is his bed and wants me to come back and sleep with him that night!! He points to the mountain and says “Siva,” which I interpret that to mean if I come back I could experience the sexual power of the great yogi ascetic. I laugh because I’ve seldom been asked out on a date in the past few years and what does the universe provide for me but some aged pundit!! He ties a Siva bracelet on my wrist and asserts that I am now his. Although it has been my practice to accept what the universe provides for me, I’m relieved when three pilgrims arrive into the temple and I can make a narrow escape. But, in India, where illusion is so palpable it can be difficult to discern the truth, a persistent thought arises asking me if I’m really going to give up an opportunity to have tantric sex with Siva? Would Pavrati have done that? A stronger thought insists that the experience would be nothing more than bad sex with an opportunistic sleaze bag!

One of the most popular things to do in Tiruvannamalai is to receive darsan with a local woman believed to have the light. Westerners pack out her shala, sitting cross-legged on the floor, in hope of being blessed. She is a small, mysterious woman who doesn’t look particularly happy. She arrives and sits down in a chair in the centre of the room and meditates, then stands up and looks each individual in the eye, as if peering into their soul, her eyes slowly moving from one end of the room to the other and back again, then she leaves silently as she came. I see a glimmer of light under her gaze while others seem overwhelmed by her presence. I understand that the external guru inevitably points us to the guru within, but my deep discerning mind questions this willingness to imbue others with spiritual powers in this way. Sri Ramana always directed people to look inward rather than seeking outside themselves for Realization.

I attend satsang, question and answer sessions about the spiritual path, particularly the Advaita path of Self-Inquiry. Mooji, a disciple of another revered Advita master, Papaji, is here, but in retreat with hundreds of his devotees. There are other silver-haired pony-tailed gurus driving around on Enfield Bullets. A Swiss German fellow is particularly good. He’s been in India for decades, sits like a rock in perfect Siddhasana, and truly seems to be a clear channel giving such insightful response that, for a moment, enlightenment seemed attainable. In one session, he speaks about the different forms of yoga – Hatha, Bhakti, Karma and Jnana yoga – and stresses the importance that when Hatha yogis are doing yoga their heart must open and the mind must discriminate. If not, it’s cold liberation. If Jnanis don’t incorporate the body, the knowledge will remain in the head. If the mind doesn’t stabilize for Bhakti yogis then they won’t succeed. The point is not to keep getting better and progressing – the techniques are tools that allow one to abide in the Self, to be in the present, in I-awareness. But, it’s not just being in the moment or the present, put having presence, which is timeless. The ultimate aim of these practices is to help you connect to your Self.

He reminds us that devotion should be a genuine yearning for moska, freedom and liberation, not an endless search. From the Advaita perspective what we are looking for is already here. We already are sat-chit-ananda, divine knowledge, existence and bliss, if we only knew it. What we need to do is get out of the way. Peel the layers of skin around the onion and remove the layers of delusion perpetuated by the ego that make us think we are separate from reality. The important task, he says, is to observe the mind continuously, as it takes us away from the Self and becomes entangled. The search is a gentle reminder to look in the right direction, where attention is possible. Otherwise, we’ll repeat the same patterns over and over until the universe hits us on the head. Listen to deep inner guidance. Make the intent to be honest and true to our Self. Guidance will come and circumstances will arrange themselves accordingly.

The ultimate guru is your own Self. The external guru is a manifestation of your inner guru and points your attention back to your Self. If you sincerely want to abide in the Self, the universe will provide and you will realise that you create your own suffering. Ramana Maharshi said, ” God, Guru and Self are one and the same… Your true nature is that of infinite spirit. The feeling of limitation is the work of the mind. When the mind unceasingly investigates its own nature, it transpires that there is no such thing as mind. This is the direct path for all.”