Part family reunion, cultural revival and dance competition, the Native American powwow rekindles the memory of traditional ways and is a resurgence of cultural pride.

A North American indian reservation is one of the last places that most people would think of as a tourist destination. Thanks Hollywood films likes Dances with Wolves, stereotypes of ‘noble savages’ are ensconced in the public imagination, yet the Rez is so still so obscure it is virtually off the tourist map. But, probably not for long as travellers look for fresh and meaningful experiences. First Peoples possess a deep spiritual heritage as well as some of the most sublime landscapes in North America. For the culturally intrepid in search of the authentic, nothing beats a local powwow on the Canadian prairies. 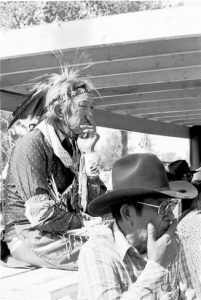 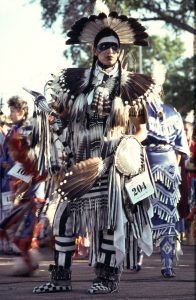 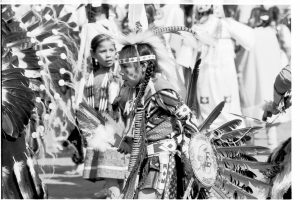 My off-the-beaten-path destination was Stand Off, a sprawling community on the Blood Indian reservation, approximately 200 km (120 miles) south of Calgary in southern Alberta. On the third weekend in July, the time of the ‘Moon of the Ripening Berries’, thousands of First Nations people travel here for the Kainai Indian Days [as well as the celebrations at Head-Smashed-In, the UNESCO World Heritage buffalo jump, on the neighbouring Peigan reservation]. Kainai is the Blackfoot name for the Blood tribe and means ‘Many Chiefs’. In the old days, when Plains Indians thought of heaven they described a place where buffalo roamed freely on endless plains of grass, blowing softly in the summer breeze under clear blue skies. That’s what southern Alberta looks like, without the buffalo, and has been home to the Blackfoot tribes since they can remember. 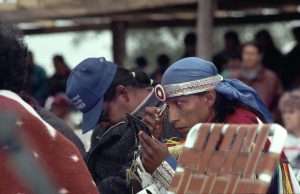 Retro buicks, or classic ‘Indian wagons’—the kind that the whole darn family can pile into—and dust-covered pickup trucks with gun racks dot the field. In the camp surrounding the powwow arena, dancers get dressed in powwow outfits in their teepees, tents and every model of caravan—modern nomads lifting bone breastplates and eagle battle staffs from suitcases. Half-dressed contestants wander between the rodeo, Indian hardball game and amusement park. A handsome warrior, with faint scars on his bare torso from a Sun Dance piercing, looks the real thing in his face paint, braided hair and buckskin. The prairie sun is scorching hot and children swing on a tire attached to a rope and plunge into the cool and muddy water of the Belly River. 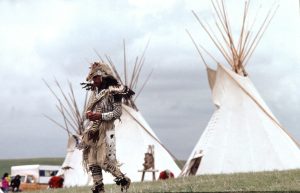 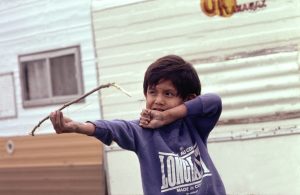 The phrase pau wau once meant spiritual leader or medicine man to the Algonquin tribes, but Europeans who watched their sacred dance thought the term referred to the entire event. The tradition of dance and song has always been integral to Plains Indian culture both for spiritual ceremony and tribal celebrations. But while it is an ancient form and Indians have gathered for centuries to sing and dance, powwow only really developed over the last 50 years. In the late 1880s, when the great warrior nations of the Plains reluctantly surrendered to white authority—sacrificing the freedom of roaming the great plains for the poverty and idleness of reservation life— social gatherings and spiritual ceremonies became prohibited. 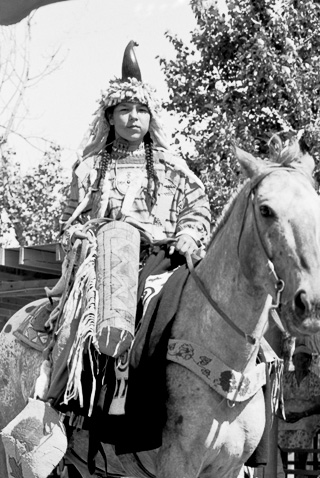 Southern Alberta was the last corner of the continent where Europeans penetrated Plains Indian territory and many full blood people still speak Blackfoot and practise their traditional ways. That is a bit miraculous considering that in 1885, the Indian Act of Canada outlawed the performance of their sacred ceremony, the Sun Dance, and even as late as 1921, the Department of Indian Affairs still sent circulars to Indian agents prohibiting dancing and drumming on Blackfoot reservations. Although intertribal contacts were revived and formerly prohibited gatherings began to take place after WW2, it wasn’t until 1951 that the ban prohibiting spiritual ceremonies was finally lifted. Even then, First Nations peoples needed a pass to leave the reserve. They didn’t get the full right to vote until 1960. During the past two decades, the popularity of powwows has steadily increased and is seen as a way to rekindle the memory of traditional ways and a resurgence of cultural pride. 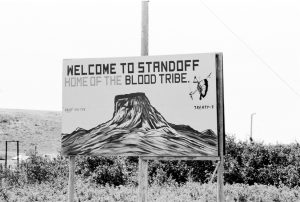 AT THE OUTSKIRTS OF THE BLOOD RESERVATION, A HAND–painted sign welcomes visitors to Stand Off, home of the Blood Tribe. On the distant hills a teepee encampment is left over from a recent Sun Dance celebration and now the 2,500-member band is looking forward to their community powwow. The Kainai Indian Days is free of charge to visitors and, in addition to offering substantial prize money to winning dancers, the powwow hosts ensure that all participants receive money to pay for the cost of transportation and food. The entrance to the grounds feels like it is on the edge of civilisation, up a side road, out past the power lines. Tribal police take a cursory glance into vehicles and remind visitors that alcohol is forbidden. 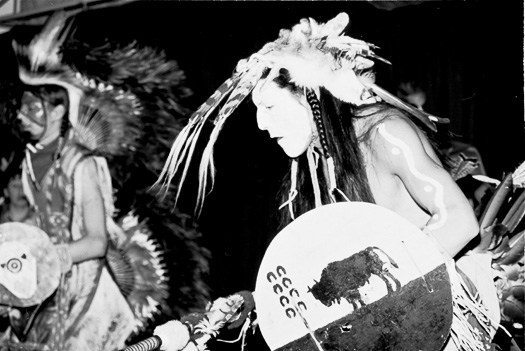 It’s nearly one o’clock and things are running a little behind schedule. The carpeted dance floor is empty and from his wooden booth the announcer makes jokes about being on ‘Indian Time’ over the scratchy public address system. Drum groups line the perimeter of the dance floor with anywhere between four to twelve singer/drummers sitting around the huge hand-made hide drums holding big sticks. It all begins and ends with the beat of the drum—the heartbeat of Mother Earth. 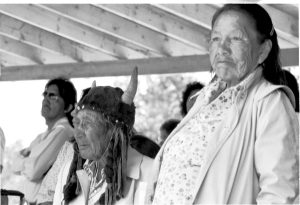 People lean back on faded lawn chairs. A man tugs down his cowboy hat and spits tobacco juice. A wrinkled old-timer in a pale blue polyester suit wears a buffalo headdress. A great-grandmother in rolled-down nylons, kerchief and swathed in acres of flowered print fabric jiggles an infant on her knees. A toddler cloaked in the skin of a wolf moves out onto the floor. Two, three, sometimes four, generations of families crowd into the circular stands. What’s so special about Kainai Indian Days is that it takes place outdoors in the same Prairie landscape where the Blackfoot have held gatherings for centuries. 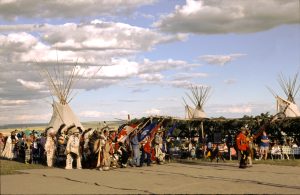 The announcer says, “Rise if you can rise. It’s Grand Entry time.” The audience stands as the dancers move into the arena in single file. War veterans in eagle feather headdresses carry flags while an Honour Song and Flag Song are sung, braids of sweetgrass are burned and prayers are made to the Creator. As dancers pass by they reach into the smoke with their hands and wash it across their face. 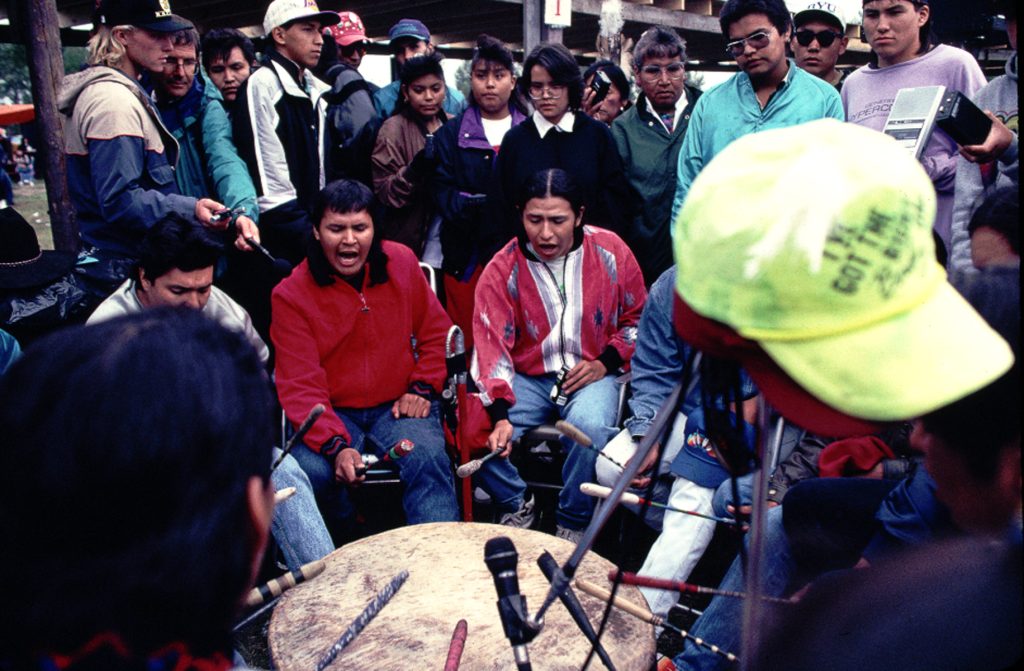 “Well, we got a Round Dance comin’ up here with a great bunch a drummers all the way from North Dakota. They’re gonna get us started with a Intertribal. So let’s see all you folks get your tail feathers out there and really impress these folks visitin’ from the big city.” The drum group, Elk’s Whistle, sings and people crowd around them with tape recorders for the thriving bootleg recording industry. It’s a social dance and Natives and non-Natives alike, crowd on to the dance area moving in an ever-tightening spiral to make room for everyone. The surface is a dazzling display of colour, noise and movement. 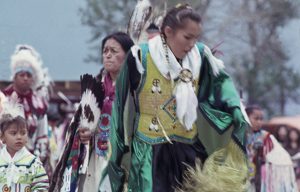 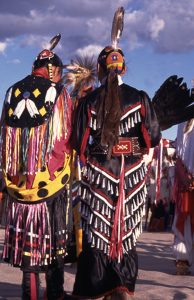 Shawl Dancers spin in semi-circles like butterflies, beside rows of elegant women in hand-crafted buckskin dresses with intricate bead designs, who bob to the beat of the drum, slightly bending at the knees to let the long fringe on their sleeves sway in time. Grass Dancers in porcupine roach headdress and breechcloths fringed with rows of brightly coloured yarn, dip and sway, sinuous and smooth, like wind blowing across the prairie. Jingle dancers move past, their dresses decorated with rolled up snuff can lids that are hung with ribbon and sewn onto the dress so tightly the jingles hit together, causing a beautiful sound like rain. A two-year-old dressed in traditional regalia barely able to walk, yet somehow stepping in time with the drum brings to mind the realisation that powwow is in the blood and runs deep. 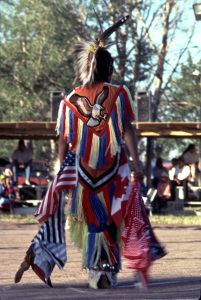 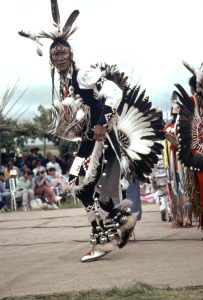 Powwow is a collision of traditional and contemporary styles. Fancy Dancers twist and spin in rapid beats, their ‘pan-Indian’ outfits of double bustles of dyed turkey feathers, and bright ribbon streamers, swirl in a blaze of colour, blending Native movements with popular, contemporary styles like break dancing. Sexy young men combine traditional beaded regalia with Heavy Metal and biker paraphernalia to look as much like Marilyn Manson as the romantic image of the Plains Indian warrior. Whatever category—Traditional or Fancy—if a dancer is to win, they must know when to stop, precisely, on the final beat of the drum. 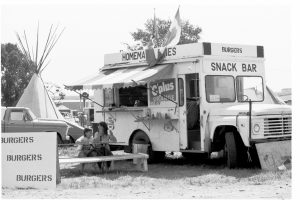 “O-kee-do-kee now, we’re gonna take a dinner break from the events here. You all go eat some of that tasty fry bread,” says the announcer. “We’ll get things underway in a few hours with the Men’s Traditional.” Ramshackle food stalls circle the outside of the arbour selling Indian tacos with ground beef on top of Indian fry bread, buffalo burgers and chips, and mint tea. Trash is strewn everywhere. Dirty-faced kids eat pink and blue candyfloss. Other than some Hutterites, and a handful of city folk, everyone is Indian. Gangs of youth, too cool for powwow outfits, flirt with each other in the latest Tommy Hilfiger and Adidas gear, their braided hair setting them apart from other urban mall kids. 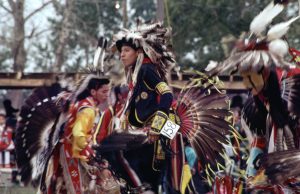 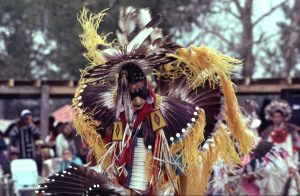 The voice of the announcer lures people back to the arena. “I just wanna let you kids know that it’s real good to see y’all here. Remember that these dances have been goin’ on for a long time. We have kept the dances alive to keep the memory of our Grandfathers and Grandmothers alive. We dance for many reasons and they don’t have to be the same.” 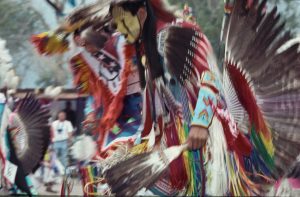 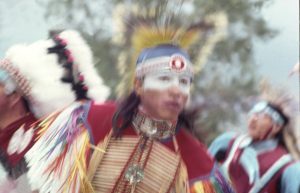 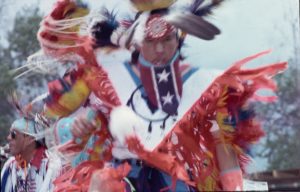 ONCE THE SUN GOES DOWN MOST OF THE TOURISTS HAVE gone. The night covers us like a velvet blanket and bright galaxies of stars twinkle overhead like ancestors in the sky. Children fall asleep to the soft chirp of crickets, wrapped in woollen blankets, snuggled in the arms of elders. The Men’s Traditional final competition is underway and dancers tap-step on the floor in stately rhythm preserving the memory of the Victory or Scalp Dance. 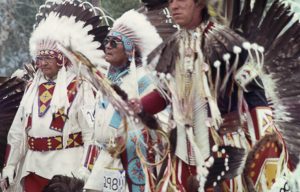 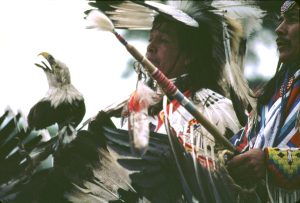 Out of the darkness comes the roaring of drums as ten men beat the rawhide and sing a wild, high-pitched song that sounds more like the call of an eagle than human noise. The drum sounds like the galloping horses of warriors returning to camp. The vibration of the drum touches their spirit and the men dance with such passion they appear to be in a trance. The movement is sometimes so intense that the regalia of feathers, bones and animal parts seems to shapeshift between human and animal. Frantic leaps and yelps, and the jangling of deer hoof ankle bells, underscore tales of the hunt and the heat of battle. It’s a medicine story, of what happened long ago, that has since been forgotten. Powwow rekindles the memory. When you watch strong powwow dancer, there is more going on that just fancy footwork; it’s their spirit dancing.

“The Powwow Trail: Part family reunion, cultural revival, and dance competition, the Native American powwow rekindles the memory of traditional ways and is a resurgence of cultural pride.” Ballet Tanz. 12/2001.