Devi Durga is the ultimate form of Shakti and the most powerful goddess in the Hindu religion. She was created in response to the prayers of humans and gods to put an end to the vicious and deadly demons. Saraswati, Lakshmi and Parvati merged to incarnate as the ultimate form of Shakti, the Supreme Goddess, who defeats evil to preserve moral order and righteousness. In Sanskrit, durga means “fort”, or a place that is protected and difficult to reach. Ma Durga is the fierce form of the protective mother. She is our protector and saves humanity from suffering by going into battle and destroying evil and demonic forces (hatred, anger, prejudice, pride, jealousy, greed and selfishness) that threaten peace, prosperity and dharma of the good. Devi Durga is usually depicted riding into battle on a lion, with ten arms, each hand holding a celestial weapon or assuming a mudra (symbolic hand gesture). Ma is the Invincible One, always there to protect her devotees from all the eight corners of the universe, as well as the earth and the sky. In the famous battle of the Devi Mahatmya, in which Durga kills the evil Buffalo Demon, all the male gods give her gifts and boons. 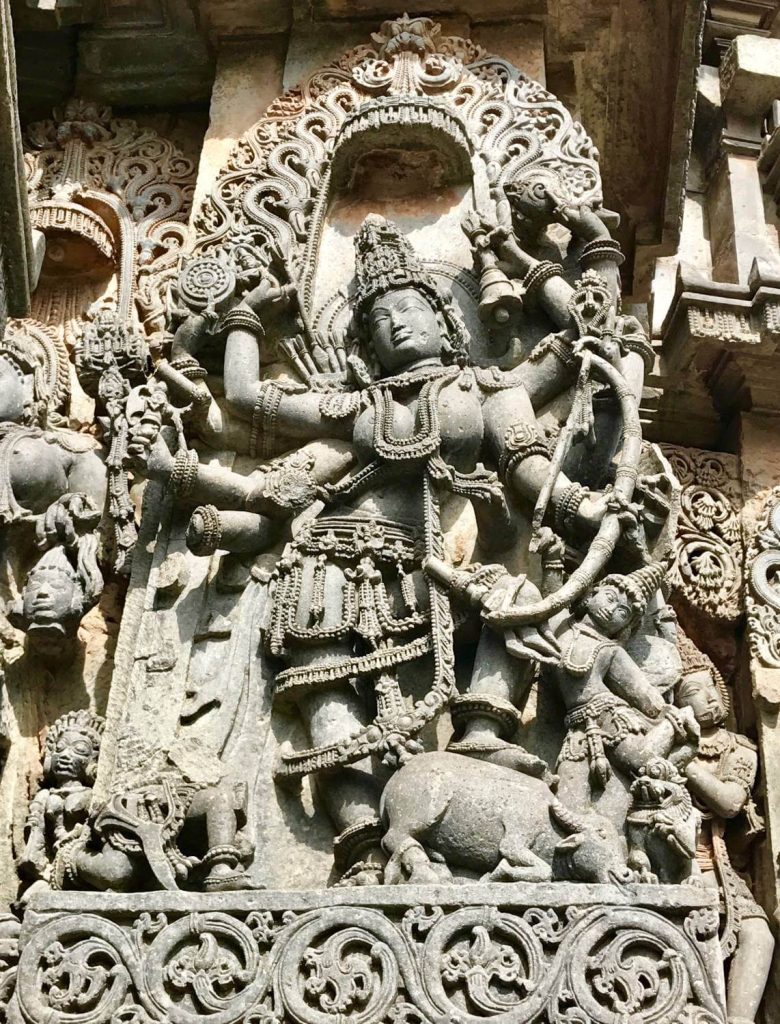 Shiva gives Durga his trident, Vishnu gives her Sudarshan Chakra, and Brahma gives her his kamandalu (water pot) of holy water and wisdom. Indra gives her his vajra (thunderbolt), Varuna his conch, Agni a missile or spear. Vayu gives her his bow and arrows and Vishwakarma his axe and shield. The lord of the mountains gives her a lion as her vahana, or mount, that has ferociousness to lead her into battle and compassion to forgive past mistakes. Her divine Shakti contains the combined energies of all the gods, but the weapons vary depending on the text or the translation of the Devi Mahatmya.

Above, Illustration of Durga with her  Celestial Weapons.

In general, Durga (The Destroyer of the Great Ego) is represented holding any of these celestial weapons: the Sword of  Worship, the Discus of Revolving Time named Excellent Intuitive Vision, the Battle Axe of Good Actions, the Thunderbolt of Illumination, the Bow of Determination and the Arrow of Speech, the Club or Mace of Articulation and the Shield of Faith, the Staff of Discipline, the Iron Bar of Restraint, the Pike of Attention or Concentration, the Sling, the Rosary of Alphabets, the Conch of Vibrations, the Bell of Continuous Tones, the Lotus of Peace, the Water Pot of Purification, the Plow of Sowing the Seeds of the Way of Truth to Wisdom, the Wine Cup of Joy, the Net of Unity, or the Pestle of Refinement.

Trident or trishul: Shiva’s three-pronged weapon symbolises the three gunas, the three main qualities that comprise everything in the universe: tamas (inactivity and lethargic tendency), rajas (hyperactivity and desires) and sattva (positivity and purity). The trident reminds us to control these energies. As the trident pierces anything to death, the compassion of Mother Durga shall confer the wisdom necessary to conquer the three qualities and emerge victorious.

Cover, The Golden Gate of Bhaktapur portrays the 10-armed and four-headed divine mother goddess, Taleju Bhawani, the family deity of all the Mala Kings in Nepal.  ©Heather Elton

Vajra or Thunderbolt: Indra’s gift is a weapon used as a ritual object to symbolize the properties of both a diamond (indestructibility) and a thunderbolt (irresistible force). It symbolizes firmness of character, determination, and supreme power.

Conch: Gifted by the Vedic God, Lord Varuna, the conch is the symbol of the primordial sound of creation, AUM, which is believed to be the center from which the entire universe emerged. As the goddess is considered as the very creatrix of all creations, she holds the conch in one of her hands.

Sword: The sword represents discern- ment, cutting through ignorance and seeing with pure vision. It symbolizes intellect and wisdom, and is carried by people who have a sense of responsibility and the understanding to discern right from wrong. This gift from the Vedic god, Agni, also represents pure, fiery power.

Bow and Arrow: A gift from Vedic gods Vayu (Wind) and Surya (Sun), the bow is symbolic of potential energy and the arrow represents kinetic energy.

Club (mace) or Axe: Representations of Durga alternate between these two weapons. Both symbolize the powers of Vishwakarma, and have the power to destroy as well as create. They signify no fear of consequences when fighting evil.

Lotus: The lotus is the symbol of Brahma, and represents wisdom as well as liberation through knowledge. It also represents purity of body, speech and mind. The lotus rises from the mud, pure and unstained, its flowers float above the muddy waters symbolic of attachment and desire. Everything easily slides off its petals. The compassion of the Goddess will enable her devotees to rise from their deepest troubles to achieve liberation. The lotus stands for awakening of spiritual consciousness in a soul. Divine Mother will help her devotees to understand the transience of life and seek the ultimate truth. 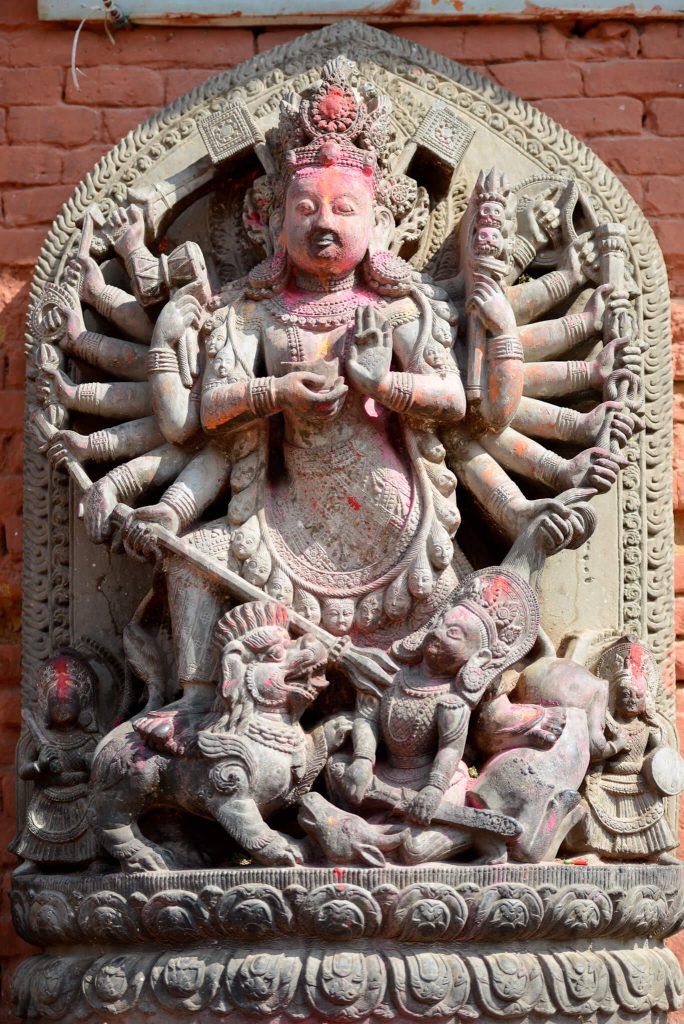