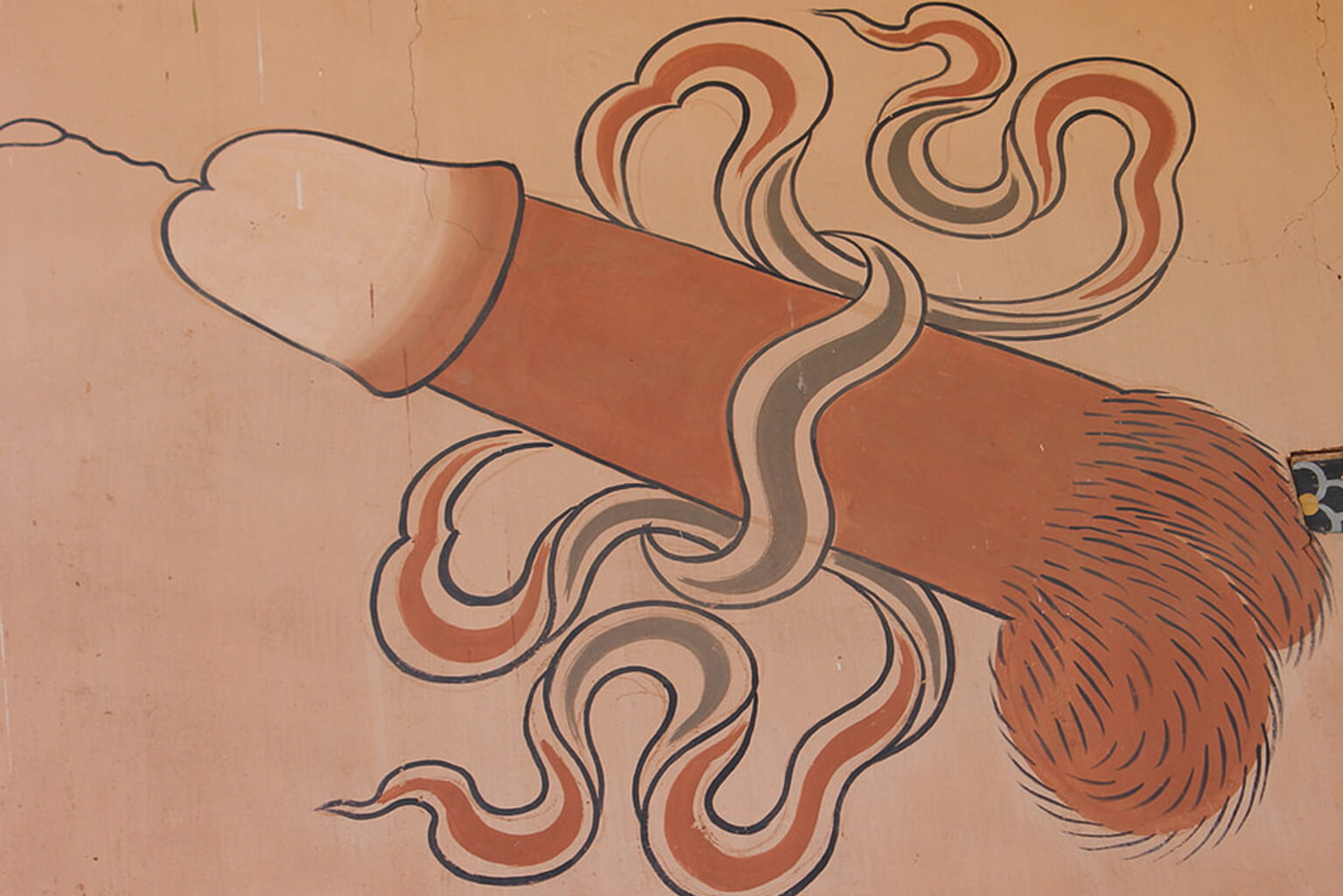 Bhutan’s obsession with fertility: The Divine Madman and his Thunderbolt

The journey to Chimi Lhakhang is a picturesque one. The most popular trail from Sopsokha to the temple leads through rice fields and an orange orchard, passing fluttering prayer flags and lone chortens (stupas) like pilgrims dotting the landscape, and brown and red homes beautifully juxtaposed against the surrounding green of the fertile land.

Approaching the temple, one cannot ignore the colourful facades and artworks of the buildings along the way. To my amazement wall upon wall are filled with whimsical, graphic renditions of gigantic phalluses. They are credited to Bhutan’s favorite saint, Lama Drukpa Kunley or ‘The Divine Madman’, a Tibetan monk who came to Bhutan in the 15th century to share his buddhist teachings. 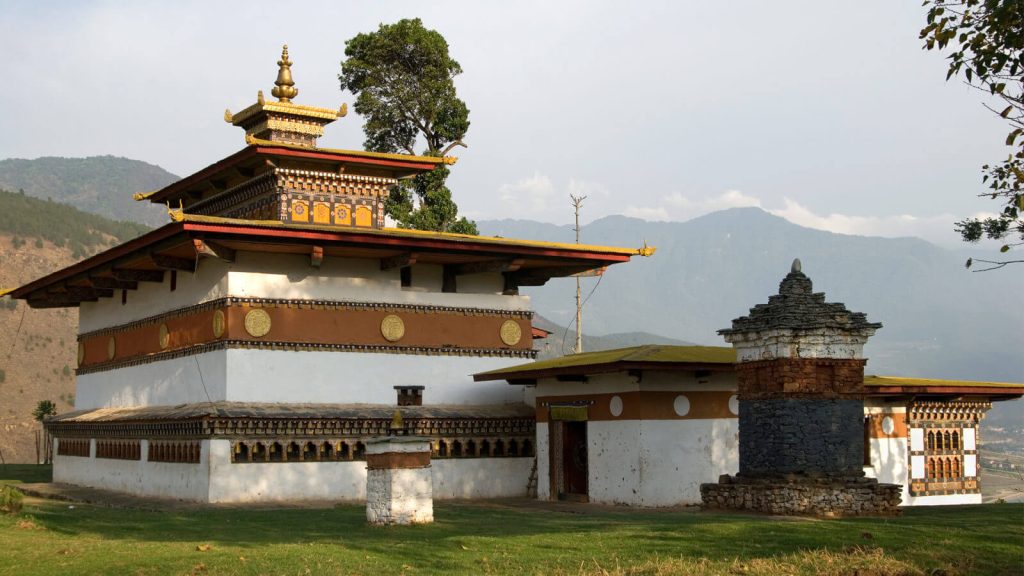 The temple itself is unimposing compared to other grander examples that can be found across Bhutan. As you approach, you are first greeted by one giant prayer wheel, past this can be found the black chorten where it is said the Divine madman trapped a demon. The main structure stands elegantly in white, studded with gold and brown medallions, surrounded by prayer wheels and topped by a gold and brown roof. Within the lhakhang stands a large statue of Guru Padmasamhava (also known as Guru Rinpoche or the second Buddha), beside him lies a reclined rendering of Lama Drukpa Kunley.

Drukpa Kunley is infamous for his blasphemous and unorthodox methods of teaching Buddhism. Fond of women, wine, dance, writing risqué poetry and songs and shocking the prudish clergy; his outrageous behaviour greatly appealed to to the lay practitioners of the time. He earned himself the title ‘The Saint of 5,000 Women’ by bringing them to enlightenment through sex. He demonstrated that celibacy was not a necessity to the path. His unorthodox means of disseminating this teaching brought him many followers, mainly women, and continues to draw them to the monastery for his blessing.

The Thunderbolt of Flaming Wisdom

Even today his legend and influence looms large in the form of giant phalli, painted on walls and hanging from the rooftops of houses. Kunley’s organ, lavishly dubbed the ‘Thunderbolt of Flaming Wisdom’, supposedly unnerved demons and demonesses alike and thus subdued them. It is also said that he is perhaps the only saint, in all the religions of the world, who is exclusively identified with the phallus and its creative power. For this reason his member is popularly rendered in paintings and he is depicted in thangka paintings holding a wooden stick with a penis head. 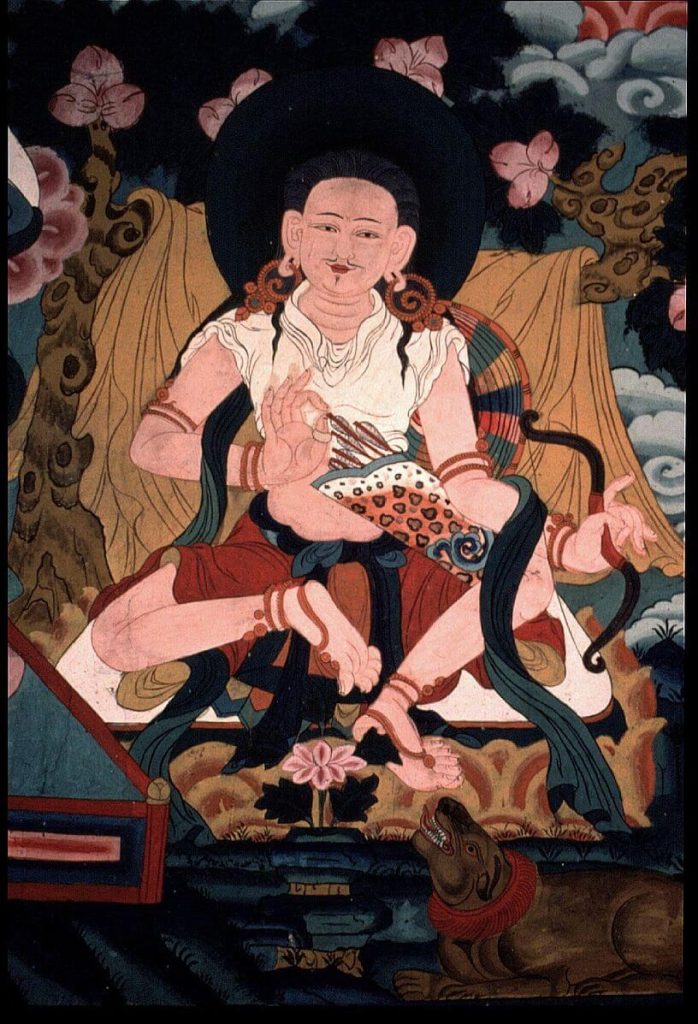 The story goes, that the legendary saint came to expel a demon from Dochula, the stunning snow-capped mountain pass on the road from Thimpu to Punakha. The demon took the form of a dog which Kunley trapped in the chorten (stupa) atop a mound in the form of a woman’s breast, now the sacred site of the fertility temple. He struck the demon with his Thunderbolt of Flaming Wisdom, his penis, and it fell down dead. As he did so he spoke the words “Chi Mi”, or no dog, and there we have the origin of the name of the temple. The site was blessed by Kunley and in 1499 C.E. the monastery was built in his honour by his cousin Ngawang Choegyel, the 14th Drukpa hierarch.

The phalli you can see painted on the outer walls of buildings across Bhutan are traditionally intended to ward off the evil eye and malicious gossip. You can find them painted on homes, schools, businesses, sculpted as pillars holding up roofs and as talismans swinging from the eaves. You may even be surprised to find one sitting between you and your fellow diners as a centerpiece at a restaurant. 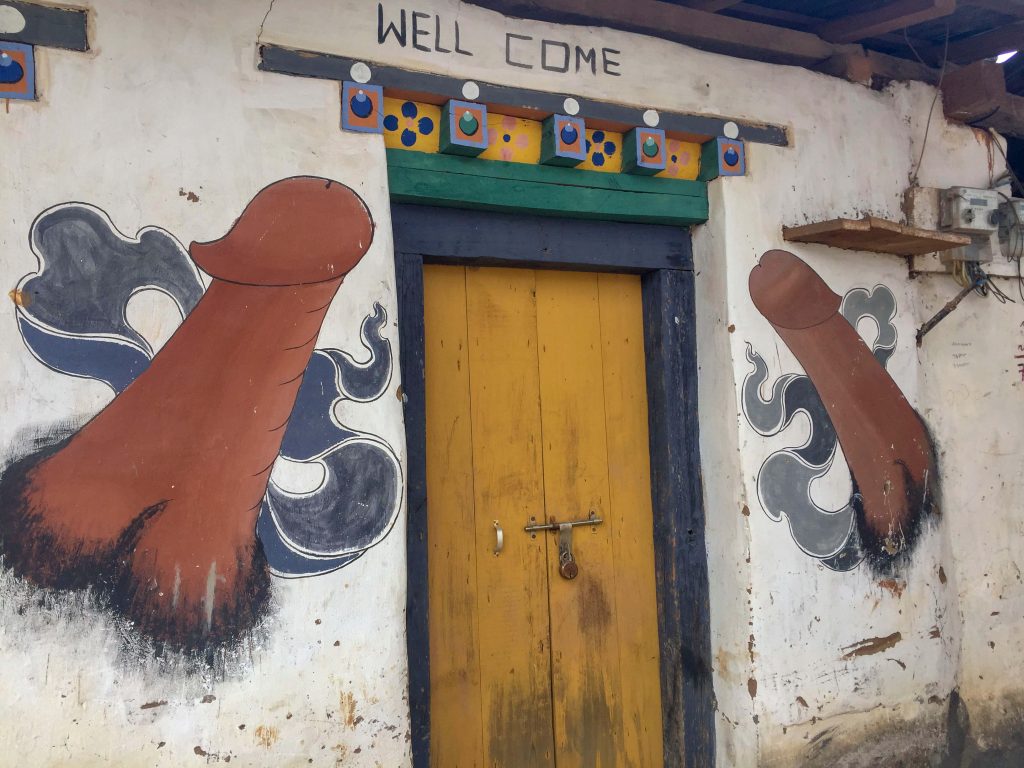 Studies by the Center of Bhutan Studies (CBS) identified the phallus as an integral part of early pre-Buddhist religion in Bhutan. It was associated with the ethnic religion of Bon (1100 BC) wherein the phallus was integral to all rituals. These divine symbols are now embarrassing to many urbanites and this folk culture is now informally discouraged in urban centres. However you can still see many rituals, artworks and cultural practices relating to the “Mad Saint” and fertility still alive across Bhutan.

Drukpa Kunley is also known as the ‘fertility saint’, and Chimi Lhakhang is visited not only by the Bhutanese but by couples from all over the world hoping to conceive. It is rumoured that Prince William and the Duchess of Cambridge visited the temple prior to conceiving, as did Their Majesties King Jigme Khesar Namgyel Wangchuck and Queen Jetsun Pema of Bhutan. Getting to the temple is an adventure in itself, the cliff side roads are precarious and not for the faint of heart. However, the fear of driving off a cliff is no deterrent to those serious about having a baby.

As part of a fertility ritual, hopeful women carry a large phallus sculpture around the outside of the monastery. A wooden effigy of the lama’s thunderbolt held in the lhakhang is then used to give childless women a wang (blessing or empowerment) from the saint by tapping them on the head with it. The women then roll a pair of 300 year old bone dice and after much deliberation and thoughtful analysis, several monks conclude the couple’s chance of conceiving. You can also request the monks’ assistance in naming a prospective child or newborn. To do this, one chooses a small piece of bamboo parchment at random from a stack, after which the monks confer and interpret the meaning before presenting the name, either Chimi or Kunley. The parchment is then left on the altar inside the lhakhang. Donating to the temple is also supposed to better one’s chances of conceiving even more. 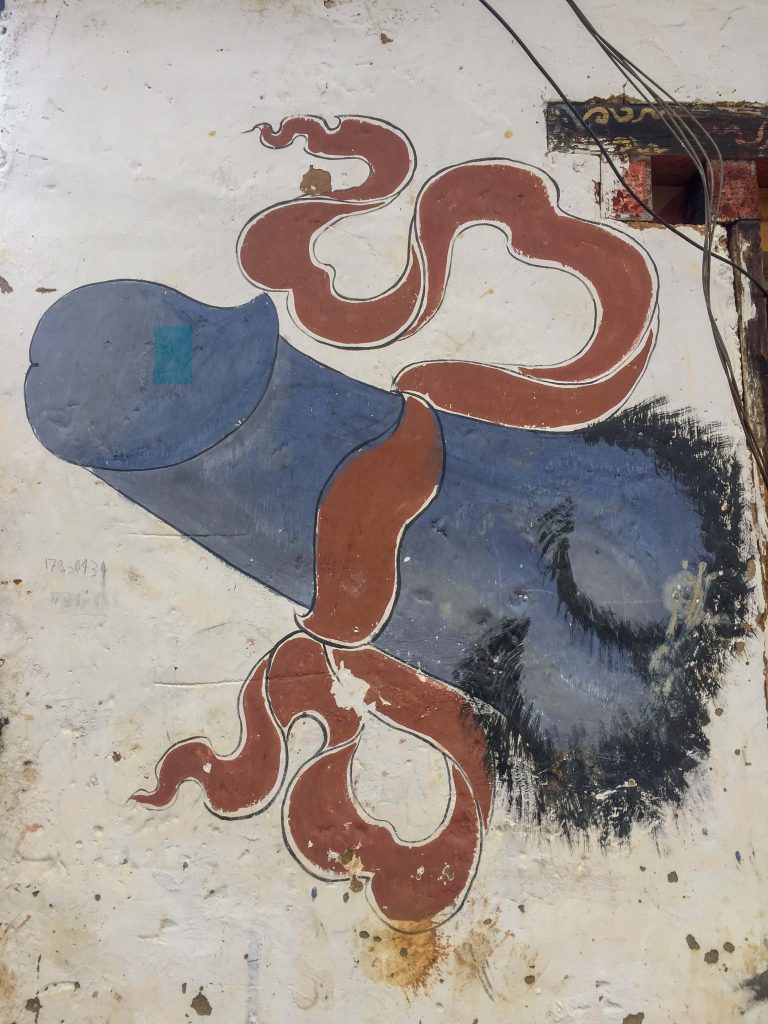 Women’s Work and a Declining Population

Despite the import of fertility in a literal, spiritual and ritualistic sense, Bhutan has been experiencing a troubling decline in its population. It has been connected, not to a decline in fertility specifically, but a decision to have fewer children. This has been driven largely by circumstances such as the level of education and economic position forcing people to marry late, not at all or to decide not to have children. Additionally, women in Bhutan are now contributing more significantly to the national workforce, which has been considered another contributing factor to the country’s declining fertility rate.

Up to the 1980s the fertility rate was as high as six children per woman. According to the Bhutan Living Standards Survey Report 2017 that rate has dropped significantly down to 1.9, below the replacement level of 2.1. With a growing aging population and shrinking workforce this trend could have serious adverse effects on the country.

There are mixed feelings about whether this issue, affecting most Asian economies, is a real cause for concern or not. One of the advantages is an increase in available infrastructure per person, yet the Secretariat for Bhutan’s Gross National Happiness Commission (GNHC) insists it is still a cause for concern. If there is a new drive to address this issue, perhaps this could be an incentive to return to some of Bhutan’s ancient fertility traditions and rituals.

For those wishing to take home their own ‘Thunderbolt of Flaming Wisdom’, a shop near the monastery sells a variety of phallic souvenirs in a different sizes and colours to suit every occasion. They range from a few inches to a couple of feet and come in colours from fire-engine red to tigerprint. With uses ranging from keychains to porch posts, doorknobs to walking sticks and even jewelry for the very bold, there’s something for everyone. 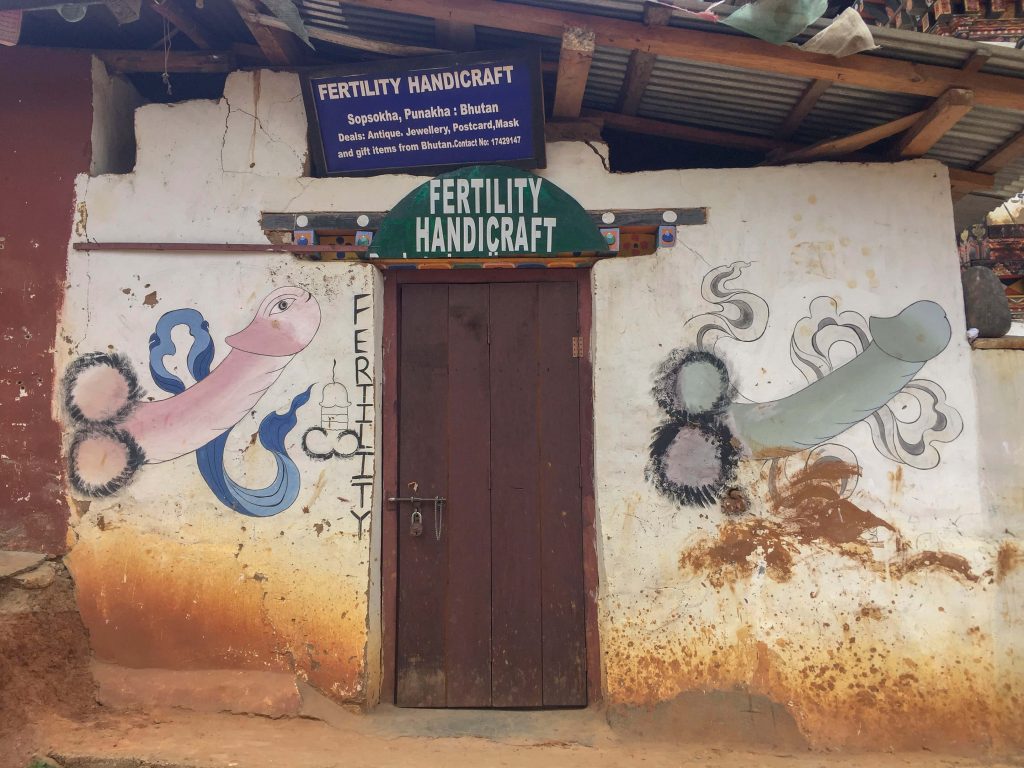 A POEM BY DRUKPA KUNLEY

I practice the path of self-discipline. I meditate every day.
I go the way of embracing love. I work as a mother and father of all beings.
I do the deity yoga. I visualize myself as a Buddha in the cosmic unity.
I read the books of all religions and practice all at the right moment.
The life is my teacher and my inner wisdom is my guide.

If this article has sparked your interest in visiting Chimi Lhakhang join Heather Elton’s Yoga Adventure in Bhutan May 11 – 21, 2019. Click here for more details and to apply.